From Sublime Wiki
Jump to navigation Jump to search 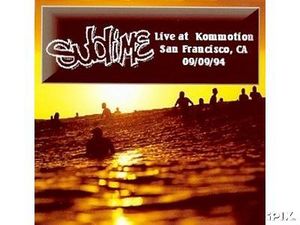 But where I really got a feel for the Sublime scene was at this place called the Kommotion. It was a little, punk rock, art collective in the Mission District, somewhere between Folsom and Harrison on 16th, I think. It's just a glorified practice room with some make-shift plywood bleachers on one side--about 40 feet long.

They had a multi-track live mixer, and some of the songs from the 'Badfish' EP came from Kommotion. I know 'We Are Only Gonna Die for Our Arrogance' was recorded at one of their shows there.

That was my first real experience going to some dirtbag, punk rock underground show, paying two bucks and walking in with a 12-pack. People were sprawled out, drinking jug wine-- it was just crazy. It was cool, though. It was summer of '94, and it was a really interesting point for the band. Not only were they big on the SoCal underground, but Northern California was vibing on them, too. Word was spreading all over. People weren't really into reggae as much, but they knew when Sublime played, it was a party.''